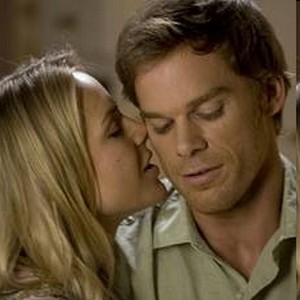 Still. Can’t. Breathe.
If you saw Sunday’s “Dexter” season finale, it’s possible you’re still breathing into a paper sack because the thing that was this close to happening is perhaps the biggest game-changer we can imagine. But here’s what you don’t know: It might still be on the way.

So where does Showtime’s gripping serial-killer series go from here? Here’s what executive producer Sara Colleton spilled to me:
Deb will find out Dexter’s secret

At least, it certainly sounds like that is the over-arching plan, based on what Colleton told me about Deb (Jennifer Carpenter) coming (fuzzy) face to (fuzzy) face with her bloody-knife-weilding vigilante brother in tonight’s season ender.

When asked if Deb will ever find out about Dexter’s (Michael C. Hall) secret, Colleton replies: “At some point that is an inevitable thing, and that will be an important season in Dexter’s history for that to happen.” Based on the near heart attack many of us suffered when Deb busted in on Dexter and Lumen’s crime scene tonight, that’s a pretty good bet!