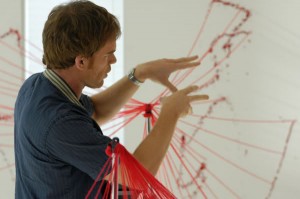 Fascinating article about Dexter and the ethics of taking the law into one’s own hands, vs the death penalty, written by Sidra Zaidi.

After more than a decade of putting executions on hold in the state of Illinois, the Illinois General Assembly recently voted in favor of officially banning the death penalty. As constituents wait for Governor Pat Quinn to either sign or veto the bill, discussions abound as to whether capital punishment is legitimate and fair. While it may seem like a stretch, Showtime’s most popular series Dexter subtly considers such debates, imparting thought-provoking lessons along the way.

The show tells the story of Dexter Morgan, who has an uncontrollable urge to kill that he vindicates by murdering criminals and vagrants who he believes deserve to die. With airtight DNA evidence on his side, Dexter pursues guilty individuals before the faulty justice system can take action. Morgan is portrayed as a hero, which is why most of the program’s viewers are on his side. But can support for Dexter-style justice translate into advocacy for capital punishment?

After all, even calm and cautious Dexter is capable of making mistakes. In the third season, Dexter accidentally kills an innocent person — an error that possibly alludes to the U.S. Justice System’s own oversight. Since 1973, 138 wrongfully convicted people in 26 states have been released from death row. Twenty of those freed from execution were held in Illinois. And according to the Northwestern University School of Law’s Centre on Wrongful Convictions, there have been 39 cases of capital punishment where there was compelling evidence for appeal or significant uncertainty of guilt. Therefore, if Illinois decides to keep the death penalty, there will always be the slightest chance that an innocent person could be executed, bringing the morality of capital punishment into question — another issue that the Dexter series explores.

Despite the fact that Dexter is a sociopath who finds it hard to empathize with other people, he still struggles to accept that his killings are ethical. Why? Because even though he is acting in good will, he is taking other people’s lives — a crime that in his home state of Florida would call for his own execution. Therefore, if it is immoral and unlawful for Dexter, an everyday citizen, to commit murderers to death, then why should a governing body like the state of Illinois be warranted to do the same?

Additionally, it can be argued that Dexter style justice can do things that our own justice system cannot, because Dexter chooses his victims on pretense (“Hey, that guy looks fishy…”) and collects his evidence unconstitutionally (who needs a warrant when your name is Dexter Morgan?). As unfortunate as it is, our police departments and D.A. offices simply do not have the finances or man-power to hunt down every shred of evidence, which is why faulty testimonials and eyewitness identifications have led to the wrongful convictions of so many prisoners waiting to be executed. Not to mention the fact that there are obvious biases and obstacles, such as wealth, social class and race relations, which hamper a great amount of criminal trials. And even if some convicts “deserve” to be put to death, it is not worth supporting a law that inevitably leads innocent men and women to die at the hands of the state.

In real life, there are no Dexter Morgans to help clean our streets of callous murderers. The only institutions that we can rely on to do that for us lie within the U.S. Justice System, which has allowed for too many erroneous and discriminatory practices to fall through the cracks. As such, I urge Governor Quinn to sign the death penalty ban into legislation. In the end, it is our flawed court systems that should be walking toward the gallows rather than the wrongly convicted.