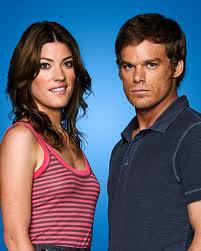 Jennifer Carpenter is excited about the coming season of Dexter

Jennifer Carpenter, who plays Debra Morgan on Dexter, says she thinks the sixth series of Dexter will surprise viewers. The actress, who plays alongside her ex-husband Michael C Hall in the Showtime drama, said she thinks there’s one or two seasons still to go.

She said: “I’m really excited about this year. [The end of the last series] was just really open-ended, it could go anywhere. It has the same opportunity to surprise people and I think it will.”

Jennifer Carpenter wouldn’t say what she thought might happen when reunited on set with Michael, who plays her character’s murderous brother, after the two separated last August. But she’s keeping herself busy with work, and has three films in the pipeline: The Factory alongside John Cusack; Hungry Rabbit Jumps with Nicolas Cage, Guy Pearce and January Jones, and Ex-Girlfriends, an Alexander Poe comedy – which is something that’s been missing from her CV of late.

“When I was in school, I was always cast as the clown. I thought that is what I was going to do. I can’t seem to make my way back to it. I guess once people hear you scream, they can’t un-hear it or something,” she said.

Article Source
We can’t wait to see if Jennifer Carpenter’s predictions about Dexter Season 6 are true!

One Response to “Jennifer Carpenter: New Dexter Will Surprise”