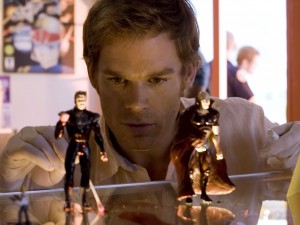 Michael C. Hall talks Dexter Season 6 And Peep World. In between the filming of Dexter Season 6, starting next month, Michael C. Hall has an indie movie opening this weekend. Peep World is about a family dealing with one sibling authoring a thinly veiled tell-all book about their problems. Hall plays a frustrated husband who goes to peep booths in the middle of the day.

Thanks to the local press day for the film, I got to spend some quality time alone with Hall. Peep World opens March 25 and he’s getting ready to shoot Dexter Season 6, so we got to talk a little about that too.

Q: Since “Dexter,” have you been getting more leading man movie offers or more of these quirky, comedy or otherwise different sorts of roles?

Michael C. Hall: I don’t know. I certainly get my share of things that I pass on because they involve me being in one way or another in the same room with a dead body, but I don’t know. I’d say when I was doing “Six Feet Under,” everybody associated me with that character and “Dexter” started. That character was my first victim and now everybody associates me with Dexter but maybe the spectrum that exists between those two characters is something that people consider when they think of me for things. I don’t know, I think I’ve been attracted to maybe stuff like this where a person is not uniquely internally afflicted. They’re just more of a relative everyman dealing with external chaos.

Q: Are you at a point where you being in a movie like Peep World helps it get made?

MCH: Certainly I’m more in that position than I ever have been. I think “Dexter” has a presence obviously in the business and has an international presence as well so that might help. Gosh, I hope so.

Q: Were you looking for comedy specifically or do you consider “Dexter” comedy anyway?

MCH: I do consider “Dexter” inherently comic. If “Dexter” weren’t funny, I don’t think anybody would watch it, but of course it’s underneath this kind of dark umbrella. Yeah, I think I’m drawn to, I don’t know if necessarily lighter things, but inherently comic things and this was certainly that. The idea of being a member of a cast that was populated by so many truly funny people was exciting for me.

Q: What is it like being in one of those peep booths even for the set of a movie?

MCH: It feels inherently illicit. It’s not a particularly sexy environment, especially if you turn the lights all the way on. It’s filled with ghosts of shameful solitary energy. Not a lot of glad handing in those places, not a lot of smiles, not a lot of conversation. Everybody’s sort of got their head down, their blinders on and are in the midst of whatever trance they’re in.

Q: It wasn’t a soundstage, right?

MCH: No, no, it was a real place in the valley that they found that we just took over a day.

Q: Where do you think Dexter Season 6 should go?

MCH: I think Dexter’s been through a great deal over the course of the fourth and the fifth, they’re sort of companion pieces I think, the flip side of the coin of Dexter’s indulgence that leads to his wife’s death is the atonement he goes through with Lumen but now that he has atoned, I think we can maybe look forward to seeing him being vitalized or activated by the same sense of, or longing to play that we saw back in the first season, more of a sense of wonder, less of a sense of storm and stress.

Q: What were your feelings about season five?

MCH: Well, I think Dexter has always in one way or another been playing at what it means to be human. I think he also has these appetites that aren’t totally consciously acknowledged for connection. I think being thrust into a situation with this character who’s dancing around in Dexter’s blind spots and leading him into this unholy alliance speaks to his desire to rebel against the code. It speaks to his desire to atone for what’s happened to Rita and her children. I don’t know, I thought it was a compelling, ultimately detour, in his trajectory but I thought it was interesting and I thought we really did have to take responsibility for the mess we made of Dexter’s world at the end of four. This seemed like a good way to do it.

All in all, it looks like we have much to look forward to when Dexter Season 6 thrills us this coming fall!