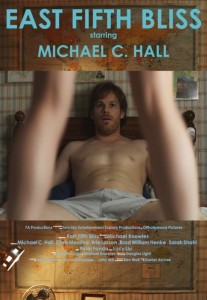 The red carpet rolls out at Edwards Big Newport Cinemas on Thursday night for the opening of the 2011 Newport Beach Film Festival and the world premiere of “East Fifth Bliss.”

The film, starring Michael C. Hall of Showtime’s “Dexter,” along with other television and film celebrities Lucy Liu, Peter Fonda, Chris Messina, Brie Larson, Brad William Henke and Sarah Shahi, is a comedy about a middle-aged man with dreams of traveling but no prospects who finds himself in an old relationship with a former classmate’s daughter.

Cast and crew, including filmmaker Michael Knowles, are expected to arrive at the red carpet shortly before the 7:30 p.m. screening at the 1,000-seat theater. A Q&A with the cast and crew will follow the screening, according to a press release.

The Opening Night Gala reception will be at Fashion Island in the Bloomingdale’s Courtyard. The event, which costs $80 and $125 for a gala-only ticket or a gala-plus-screening ticket, respectively, includes catering from more than 25 restaurants and a fashion show.

A limited number of both the package tickets and the gala-only tickets were still available as of Wednesday afternoon.

The Los Angeles Times, the Daily Pilot and Newport Lexus will host the Friday Night Spotlight at the Newport Lexus dealership on MacArthur Boulevard.

The party will follow the feature films screening at the Regency Lido Theatre: “Lucky,” which stars Colin Hanks; and at the Starlight Triangle Square Cinemas, “Silver Tongues,” which stars Lee Tergesen; “Conception,” directed by Josh Stolberg; and “High Road,” directed by Matt Walsh.