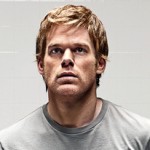 Rita, we hardly knew ya. As Showtime’s gears up for the carnage of Dexter Season 6, it seems Dexter Morgan (Michael C. Hall) may be getting a love interest to help heal the loss of his murdered wife. The series is on the lookout for a gorgeous twentysomething Latina who will play a character named Jamie. Jamie is a student of Cuban decent who relocates to Miami to attend grad school. Her over-the-top, positive energy is just what Dexter needs.

There will also be a healthy dose of male energy coming to the precinct in the form of “Chicago Mike,” a black homicide detective who is described as tough and stylish. He’s not thrilled about having left Chicago for Miami, where his wife has found employment. Expect him to clash with the established team, including Debra (Jennifer Carpenter).

And the lab will be welcoming a new thirtysomething intern named Louis Greene, who buddies up to Masuka (C.S. Lee). A genius on the computer, he doesn’t have a problem showing off his intellect.

Excited for Dexter Season 6? And are you ready to see Dexter love again?

6 Responses to “Possible Love Interest for Dexter in Season 6”