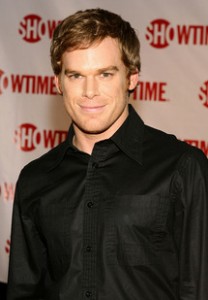 Michael C Hall chats! Dexter Season 6, along with his upcoming film, Peep World. He also discusses what TV shows he considers to be Must See TV.

We may never see an Arrested Development movie in our lifetime. Thankfully, Barry W. Blaustein has made Peep World, an ensemble comedy about an uproariously demented and out-of-touch family that gives the Bluth clan a run for its money. In the film, dysfunctional siblings Sarah Silverman, Rainn Wilson, and Michael C. Hall overreact when their youngest brother (Ben Schwartz) writes a tell-all book about the family’s dirtiest secrets. We spoke to Hall about awkward dinner parties, Hitler fascinations, and the next season of Dexter.

Q: Dexter is must-see television for so many people. What’s must-see TV for you?

A: Michael C Hall: I watch a lot of sports on TV. As far as series go, I often catch up with stuff. I just picked up all of the DVDs of Breaking Bad, which I haven’t seen yet. I’m looking forward to doing a marathon of that. Just recently, I made my way through The Wire well after the fact. That show is mind-blowing. The expansiveness of their storytelling is just unbelievable, and I think Omar is one of the greatest characters in the history of television.

Q: Is the upcoming Dexter season going to be your last?
A: Michael C Hall: I can’t say for sure, but probably not. [Laughs]

Q: Is there anything you can tell us about the upcoming season?
A: Michael C Hall: I have a real sense of where we will be headed this season, what new characters we’ll be meeting, and where we’ll pick up, but I’m not going to tell you at this point. [Laughs] The writers have just reconvened, and nothing is official at this point. We have a sense, but I couldn’t even tell you definitively if I wanted to.

Q: What was it about Peep World that hooked you?
A: Michael C Hall: It was the script. There were so many well-drawn characters, and that suggested to me that it probably would attract a really good ensemble of actors. But if there was any one specific scene that excited me, it was [my character] coming back home and trying to talk his way back into his own house.

Q: That was an inspired bit. It appeared unscripted.
A: Michael C Hall: Well, we maybe fudged the timing of it or how it worked when we got to it, but, yeah, it was all in the script. Believe it or not, there was very little improvisation in it. It was all well written for us.

Q: As was the final dinner scene, which is the first time all of your characters are in the same place at the same time.
A: Michael C Hall: Yeah, that was really nice for us because for the most part we had all shot out our individual story lines, and I think there was always an anxiety of, Is this going to hold together? These are very different stories. Are we going to feel like a family? And we immediately had such a rapport, with so much laughter and misbehavior. Even though we were simulating an awkward dinner scenario, I think the fact that we all enjoyed each other’s company kind of came across.

Q: Speaking of awkward, how do you explain your character’s Hitler fascination?
A: Michael C Hall: Well, I think he has a general desire to escape his dwindling business and the pressure of oncoming fatherhood, et cetera. But I think that Jack also has a dissatisfaction with himself, a self-loathing, so he spends too much time poring over the details of the life of the man who exterminated his people. It is like some kind of escape into this weird sort of subtle punishment. Or maybe he’s just a history buff, and this is a “know your enemies” type of thing. I don’t know.

(It’s good to know that Michael C Hall is a fan of great shows like The Wire!)