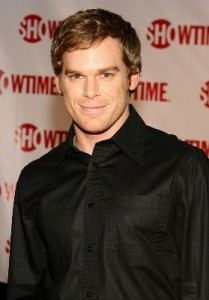 Next up for our Dexter star, Michael C Hall, aside from filming the smash hit TV show next month, is his role in Love, Scotch and Death. Vera Farmiga co-stars in this bizzare but interesting sounding film. James Manos Jr, who adapted Jeff Lindsay’s Dexter novels, will make his directorial debut for this film, and also wrote the screenplay.

James Manos Jr. probably didn’t know he was creating a huge hit for Showtime when he brought them Dexter but he wants to see if he can bring some of that magic over to the big screen, and Deadline reports that he’s improving his odds by teaming up with the guy who brought the anti-hero serial killer to life.

When Michael C. Hall completes the sixth season of Dexter, he’ll be joining Manos and Vera Farmiga in the independent feature Love, Scotch and Death, which is expected to start shooting in November.

The story, written by Manos, seems to be a mini-biography that covers one particular week in his life. During this period of time, he returned from a stressful vacation to find out his parents died of natural causes together in bed, which leads him to dealing with an unsympathetic funeral director, as well as his manic wife and bewildered children. As if that wasn’t enough, he also has to deal with an assault arrest and the death of his wife’s dog.

It doesn’t sound like the most riveting of plots, but Manos does have an impressive track record that includes The Sopranos and The Shield, as well as Dexter, so I might be willing to give it a try.