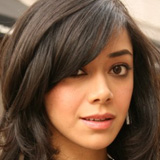 Well, they did say a hot little latina number will be one of the three new characters for Dexter Season 6. They also mentioned Dexter *may* get a new love interest. It would seem that both are wrapped up in the same little package, with the announcement of Aimee Garcia to the show. This follows the previous announcements of Colin Hanks and Mos Def, who have also landed significant roles on Dexter Season 6.

Out with the old and in with the young. Dexter Morgan has hired a new nanny that will help take care of his young son Harrison throughout the Showtime show’s sixth season, replacing Maria Doyle Kennedy as Sonya.Joining Dexter as the new hired help is actress Aimee Garcia playing Jamie, the younger sister of Dexter’s coworker Angel Batista. What are the odds that Jamie sees or finds something she wasn’t supposed to? What would surely make “Hell break loose.”

Fresh off the cancellation of ABC’s Off the Map, TVLine reports that Dexter has recruited Map star Aimee Garcia for a new role in the coming season as baby Harrison’s new nanny Jamie, and none other than Angel Batista’s sister herself!  Could there be romance in the air, amidst all the blood spatter?  After Lumen left (and thank Harry she did), we know Dexter doesn’t mind getting down a bit in the wake of his wife’s murder. Oh, and don’t worry about Dexter’s former nanny Sonya, as the report points out “sources confirm she either got fired, quit, or died.”  Hmm.  Alright then.

With the roundup of new blood announced so far, it’s going to be a very interesting Dexter Season 6!